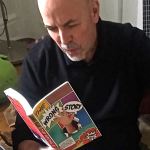 The Cherwell and Avon Book Group for Bath-based Oxford University alumni was founded by Deborah Collins, Anna Sabine-Newlyn and James Ellis, and regularly joined by Tiff Nield and Geoffrey Clements. The first gathering was in May 2017 and the group has been meeting every month (ish) since.